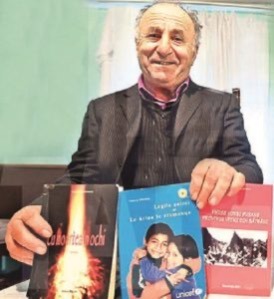 Valerică Stănescu was born in Kraineaska, Transnistria, where her entire family had been deported: his father (Urda), his mother (Ljuba) and his older brothers (Luludi, Tinca and Melo). Possessed of goods, carts and horses had been confiscated, left to disease and misery, in an area affected by typhus, Valerică Stănescu miraculously survives, being saved from death by his older sister, Luludi. For two years, the family was forced to stay in Transnistria. After the end of the war, the family returned to Romania. Valerica Stanescu was two years old.

At the age of 11, Valerică Stănescu is enrolled in school, keeping on him a kind of catalog with school results, which he presented to each school in the localities through which his family of potters passed. Attracted by literature and history, the young Valerică Stănescu decides to continue his studies up to the level of 10 classes (the equivalent of today’s high school years), practicing, at the same time, the craft of his people of potters. Starting with 1967, he began to write in his first book, “Laws of the tent”, which the Publishing House “Scrisul Românesc” from Craiova had included as a reserve, to be published in 1981, but the manuscript in its original form did not was never published.

Reconsidering and assuming the mission of preserving the memory of his family, after the fall of the communist regime, Valerică Stănescu rewrites the work, which she published in 2004 under the title “Laws of the tent / Le krisa le rromenqe” (Vanemonde Publishing, Bucharest), under the form of a micro-novel, in a bilingual Romanian-Roma version, the translation into Romanian belonging to the writer’s daughter, Camelia Stănescu, a student, at that time, of the Faculty of Foreign Languages ​​and Literatures, University of Bucharest.

In 2007, he published the autobiographical novel “With Death in his Eyes” (Marlink Publishing), which was launched in February 2008, at the Ministry of Culture, on the occasion of “Roma Liberation Day”. The novel inspired the staging of the theater show “Kali Trash / Black Fear”, directed by Mihai Lukács, produced by the Roma theater company “Giuvlipen”. The premiere of the show took place in 2018, on the stage of the Jewish State Theater. The show was dedicated to the memory of all Roma victims of the Holocaust in Romania.