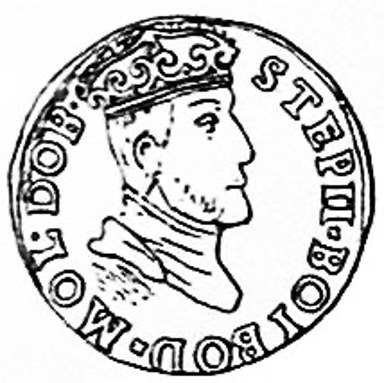 Ștefan Răzvan marked the history of Moldavia at the end of the 16th century, becoming ruler of Moldavia between April and December 1595. These historiographical references were recorded by the chronicler Miron Costin in “Letopisețul Ţării Moldovei”, as well as by a number of other chroniclers, historians and writers.

In order to strengthen the army against the background of strong rivalries between the two great boyar families, Lăpușnenii and Movileștii, as well as the dissatisfaction of the peasants, but also the threats from abroad, a strong and faithful man was needed, so in 1593, Răzvan is named hatman, leader of the Moldovan army. He, as a leader of the armies, a good military man and a connoisseur of several languages, fulfills military and diplomatic missions between Moldova, Transylvania and Wallachia. He leads the anti-Ottoman campaign of Moldova, becoming very popular among soldiers. Amid the dissatisfaction of the population and its allies towards the reign of Aron Vodă, Ștefan Răzvan, with the support of Sigismund Báthory and the soldiers, removed Aron Vodă, becoming, on April 24, 1595, voivode of Moldavia. Ștefan Răzvan supports Mihai Viteazul’s Christian alliance.

On October 20, 1595, Ștefan Răzvan joined with his army the armies of Mihai Viteazul and Sigismund Batory, defeating the Ottoman army at Giurgiu. Taking advantage of his absence from Suceava, the Polish invade Moldova and install Ieremia Movilă, a well-known enemy of Mihai Viteazul, as lord. Returning from the battlefield, Ștefan Răzvan goes to Moldova, trying to recover the Seat Fortress. The battle of Areni takes place, near Suceava, on December 3, 1595. Ştefan Răzvan is killed by beheading at the order of Ieremia Movilă.

The personality of Ștefan Răzvan Voievod was to be reinterpreted in the dramatic opera “Răzvan şi Vidra”, written by Bogdan Petriceicu Haşdeu, published in 1867. The opera, of historical inspiration, has as main character Ştefan Răzvan, together with Vidra, his wife, named Maria, Moţoc’s niece.