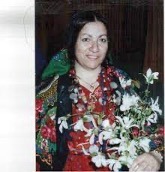 Luminița Cioabă was born on October 1, 1957 in the city of Târgu Cărbunești (Gorj County), being the daughter of the Bulbasa Căldărari (cauldron makers) Roma, Ion Cioabă. Wanting to complete her studies, she opposed a marriage at an early age (as is the custom of the Căldărari Roma), designed by her family. She graduated from the “Octavian Goga” High School of Philology, the Popular School of Art, the Department of Directing and Acting and then the Faculty of Philology from Sibiu.

Luminița Cioabă is a well-known Rromani poet, her books being translated into Romanian and English. She became a member of the Romanian Writers’ Union.

Luminița Cioabă collected a part of the Roma folklore and processed it, in the way that the Romanian writers did for the Romanian folklore in the 19th century.

One of her best-known books is the volume of short stories “The Lost Land,” dedicated to “those who have lived their lives over time with the sky as their roof, the grass of the earth rising in the soul of the long roads that do not end not even beyond the sky.”, book published in Rromani, Romanian, English and German. The stories present different literary themes from the mythology of Roma culture: the story of the nation in ”Gypsy and the nightingale”, that of the red poppy, the spring that is the “day of reconciliation” in ”Birch Grove”, the ritual of the tent community (șatră) meal in Meralda, the road, song and freedom in the Lost Country and the Golden Island, love in Wisdom, the Curse of the Bear, the Wild Rose Flower, the Queen of the Night and the Stone Flower.

In addition to her literary activity, she holds the position of president of the Social-Cultural Foundation of the Roma “Ion Cioabă”, participates in seminars and meetings with non-governmental organizations. She edited and leads the magazines “Neo Drom” and “Divano Rromano” in Sibiu.

Luminița Cioabă also made two documentaries: “Roma Tears” (“Iasfa Romane”) – 2006, which presents in 52 minutes, based on the testimonies of survivors, the tragedy of deporting Roma to Transnistria and “Memories from the tent community (șatră)”.