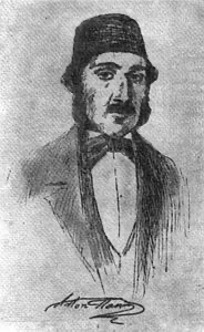 Anton Pann was born in Sliven, Bulgaria. His father, Pantoleon Petrov, was a potter, and his mother, Tomaida, came from a family of Greek descent. His father practiced the craft of smelting and processing copper, specific to the Căldărari (cauldron makers) Roma.

Following the outbreak of the Russo-Turkish War, Anton Pann, together with his mother and two other brothers, took refuge north of the Danube, settling for a time in Chisinau. His musical qualities (he was a good connoisseur of vocal and instrumental music), as well as his language skills (he spoke Greek, Slavonic, Turkish and Romanian) will help the young Anton to become an important singer of religious music, becoming a member of the Chisinau Orthodox Choir. After 1812, Anton Pann moved to Bucharest, where he perfected his musical knowledge under the guidance of Professor Dionisos Foteinos. He also attends classes at the school of religious music founded by Petros Ephesios.

Metropolitan Dionisie Lupu appointed him a member of the commission for the translation of church songs from Greek into Romanian, during which time he continued to sing in churches and to be a music teacher at various schools. In 1830, Anton Pann opened the series of prints with religious and secular content, managing to make all the religious songs available to the pew. Based on the background of his activity carried out at the pews of various monasteries, during 1842-1851, with the support of Metropolitan Neofit, Anton Pann is employed as a music teacher at the Theological Seminary in Bucharest.

Anton Pann also approached the music of fiddlers, himself becoming a member of a group of fiddlers, which, later, will give him the opportunity to print the first musical transcriptions from the repertoire of Roma fiddlers, published at his printing house at the Olari Church in Bucharest. Among the most famous works of Anton Pann, we mention “Until I didn’t love you” and “Bordeiaș, bordei, bordei”.

Around the Revolution of 1848, Anton Pann composed the melodic line for the poem “Un Răsunet”, written by the poet Andrei Mureşanu, then known as “Wake up Romanian!”. Starting with 1990, the poem became the national anthem of Romania.

Between 1852-1853, he wrote his famous “Collections of Proverbs or The Story of Speech. From all over the world gathered and given back to the world”, works that made him unique in Romanian literature. Anton Pann is one of the founders of cult popular literature in Romania.