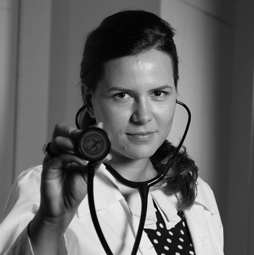 Short profile of their background and motivation to be supported by a mediator Challenges faced and overcome.  Advice to others.

My name is Adriana Corina Stanciu, I am 29 years old and I am Roma. I was born in Ploiesti, in a mixed family- my father is Roma and my mother is Romanian but as a child I grew up with my father’s family. I graduated Carol Davila University of Medicine and Pharmacy in Bucharest from the Faculty of Medicine in 2013. Soon after, I completed the national residency program for medical oncology  and then  passed the national exam for a specialist doctor. I can proudly say that currently, I am a  medical oncologist at the very beginning of my career. During my studies, I benefited from two REF scholarships. I received the Roma Health Scholarship Program (RHSP) in Romania (starting from my second year of medical school). I also studied a year abroad, as an Erasmus student in France, at Aix-Marseille University, and I received the Roma International Scholarship Program (RISP) during that period.

I started school quite early (I was only 6 years old) because I was very curious and my parents decided I was ready. They also decided that it was best to go to the closest school where there were both Roma and non-Roma attending. I was very lucky to have an angel as a teacher, a very special lady that made no difference between us kids who were Roma and non-Roma. My career path was a natural choice; after difficult moments as a young patient, I decided at an early stage of my life that I want to be the doctor I would have wanted to have when I was feeling sick.

As a beneficiary of RHSP, I had the chance to learn that professional development is straightened by personal one. I was was guided to realize the importance of defining my identity and the importance of a having a voice, especially during the advocacy camps.  The RHSP program also exposed me to successful Roma in different areas of medicine who inspired me and made me feel more confident about my future. Access to healthcare is of vital importance and by having Roma professionals in the field, we are working to improve access to medicine. The mentorship component of the program facilitated my access to the health system from the pre-clinical years of my training and that largely boosted my motivation (the first year of medical school is very difficult because of the amount of information to learn without too much practice). I also became part of the medical students organization and became a volunteer in many national and international projects. During extra-curricular academic activities I found out more about a young and fascinating field of medicine and so I decided to be a medical oncologist.

An achievement I am very proud of is winning the title, “Student of the Year in Medicine” and “Student of the Year in Romania” in 2011. The support I received from REF played a very important role in attaining this achievement. I think that personal example is very important and I hope that my story will inspire Romani children to dream that they can become anything they want. Mentality is the first obstacle and a very strong one but if they believe and have the luck to have parents or teachers that believe in them then the sky is the limit.